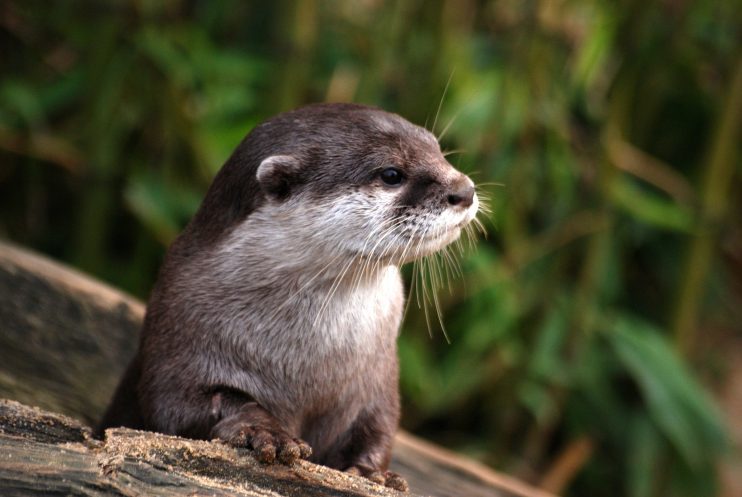 Before North America’s European colonization and the fur trade (that continued until 1961), River Otters inhabited every fresh waterway on the continent.

For a species greatly impacted by human behavior, they have become a beacon of hope for nature’s resilience. With clean water and air laws, resulting in healthier environments, River Otters are repopulating on their own.

Unlike their sea-faring relatives, River Otters function both on land and in water.

They are crepuscular – active in the early morning and twilight hours – and busy year-round. While River Otters don’t migrate with seasons, they will travel up to 25 miles to search for food sources. Areas, where otters have taken up residence, are those that have all the right ingredients for the good life; plenty of cover vegetation, rock piles, logs, clean water, and an adequate supply of food.

Adults weigh between 10-30 pounds. They can remain underwater for up to 4 minutes, swim up to 7 miles per hour, and dive to 60-foot depths.

They live in social groups, most consist of a mother and her offspring. Males also live together in ‘bachelor pods.’

River Otters hunt and travel together. They share the same den, latrines and groom each other.

In the wild, the North American River Otter life span is between 8 to 12 years. In captivity, they’ve been known to live up to 25 years.

River Otters are opportunistic home finders like Western Bluebirds. A holt or couch is also known as a den. It must have enough underground interior room for family raising, be near clean water and food sources, above flood level, and have multiple entrances and exits—some above and below water level, often near Beaver dams, in embankments, or under logs.

Mature otters can mate any time between December and April. Unlike their European counterparts, North American River Otters have the ability to delay implantation for up to eight months.

In early spring, pregnant mothers find and prepare holts. This is where they will give birth from one to six kits who will remain with her for up to a year. At birth, otter pups are toothless, fully furred and they weigh about the same as a medium-sized apple. At around a month-and-a-half old, kits open their eyes and begin playing.

At around two-months-old, thick water fur fills in and the mothers begin teaching pups to swim. To do this, she holds them by the scruff, drags them into the water, and dives with them.

Adult River Otters eat between 2 to 3 food per day. Being busy balls of energy with thick coats to maintain, they eat often and prefer protein in the form of fish. Other items river otters consume include;

Similar to raccoons, River Otters use latrines (common defecation areas). Latrines are away from living spaces and, in addition to a site for expelling body waste, they serve a function as a location to leave powerful territorial scent markings.

In the water river otters are generally safe from predation. On land, they are vulnerable to;

Diseases to which River Otters are Susceptible

River otters were nearly wiped out in the early fur trade era on the North American continent. In recent years, habitat destruction and fragmentation, with dams, roads, and expanding housing developments, as well as water pollution have impacted River Otter populations.

When humans create monocultures such as fish hatcheries and ponds, River Otters are only too happy to take advantage of them. So-much-so that they become pests. Sadly, nuisance otters pay the price for their ‘misbehavior’ with relocation and death.

An unexpected but encouraging result of the US EPA Clean Water Act (1972) shows evidence of River Otters repopulating fresh waterways on their own. Visit the River Ecology Project Map to watch an ever-growing list of otter sightings throughout California (Zoom in on Nevada County). Or visit the project on iNaturalist.

For the writer and editor, this post signifies a conclusion to the multi-year watershed study project. River otters, like Western Bluebirds represent hope. Hope that, collectively, humanity learns to reprioritize its values. No longer can we thoughtlessly sprawl and use up resources. Space for nature and wild animals as well as keeping a clean house (air and water quality) are needed to maintain balance in every ecosystem….and they are all connected.

If anything, 2020 has held before us a harsh microbial mirror that we must spend time examing. The halt in business-as-usual created an opportunity for a significant pivot. I hope we can. And I hope we do!

While I plan to write a few more FDC articles here-and-there, my focus has turned to complete the editing process on a 30-minute Deer Creek centered film – Aerial Views and History of the Deer Creek Watershed.

Thank you for joining along on the Deer Creek journey! I hope you take away information to love and share about your watershed.