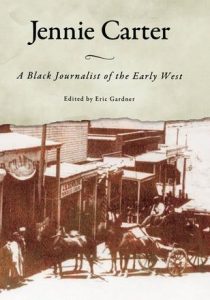 Jennie Carter was a free black woman who moved from New Orleans to Grass Valley around 1860.

Between 1867 to 1874 she wrote essays, from her Nevada City home, that were published in The Elevator, a San Francisco black newspaper.

When Carter first began writing for The Elevator, her intention was to publish material for young readers. “Children, you hear a great deal said about color by those around you, see attention given white persons by your friends that is wholly unmerited, while those of darker skin are treated with cool neglect. Such are wrong, and that you may avoid like mistakes I write this for you to read. Let your motto be, civility to all, servility to none. Those reminders of bondage we must get out of the way as soon as possible; and while we would treat all with respect, we should not talk about color, light and dark, black and white.”

It wasn’t long before her writing was composed for a general audience. Carter’s essays provide a detailed and lively peek into Nevada County life—after the Civil War—when black men were working to establish voting rights, (white) women’s suffrage was in its infancy, the Central Pacific Railroad was under construction, and resentment against Chinese immigrants was building.

Since Carter wrote under several pen names—Ann J. Trask and Semper Fidelis (Always Faithful)—her body of work was lost until 2007, when a historical researcher discovered their connection and put the pieces together.

“She was a skilled cultural critic and as such her observations about race and racism, discrimination, and a host of social issues have important ramifications for today,” comments Eric Gardner, editor of Jennie Carter, A Black Journalist of the Early West.

The Jennie Carter book should be on recommended reading lists for every nineteenth-century history class in Nevada County (California).

I discovered this book in a reference on a Wiki page. Exciting! Connecting with Jennie’s words, I felt a sense of admiration and deep respect for this intelligent, spiritual woman who bravely spoke universal truths that would go unrecognized for at least a century or more.

As I read, my ears were tuned for the echos of Jennie’s voice. When she described drinking water out of Deer Creek, Carter’s inclusion in the Deer Creek Project went from vague imaginings to composing detailed plans for a script, actress, locations, and props.

Equally engaging are Gardner’s footnotes and commentary. It’s like a book within a book that includes a code-breaker for every reference and antiquated expression. The research, alone, requires its own focused read.

How fortunate we (as readers and history buffs) are to have this thoughtful and carefully composed work available in one volume! 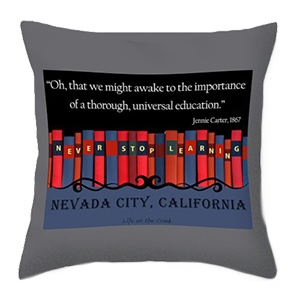 “Oh, that we might awake to the importance of a thorough, universal education.” – Jennie Carter, 1867

To learn more about Jennie Carter, check out these posts;