The Arroyo Willow – Salix lasiolepis – is a native shrub or tree in California and in most Western states.

Willo is important in riparian (creek and waterway) environments;

The Arroyo Willow likes to keep its feet wet. It spreads by sending out root runners, which create thickets. (It can also propagate from branch cuttings.)

The species is known as a freshwater indicator. As much as the Arroyo Willow likes water, it is also drought tolerant.

Along with plant and animal habitat, the Arroyo Willow is used as a natural form of erosion control.

Native Californians and herbalists use the bark and leaves to treat headaches, sore throats, and diarrhea.

The Arroyo Willow is used to make baskets, arrows, furniture, and flutes.

The willow grows long, straight shoots in the spring. These shoots are highly flexible and resist breakage. It symbolizes grief – (bending) and recovery  – (bouncing back).

“Respect the plant as a living thing so it’s still there the next year,” – Linda Navarro, California Indian Basket Weavers Association 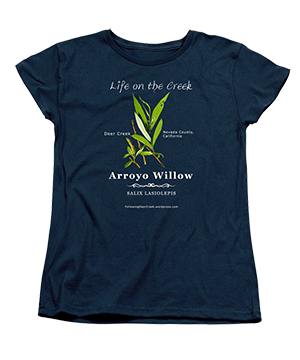 Guide to Wild Foods and Useful Plants by Christoper Nyerges