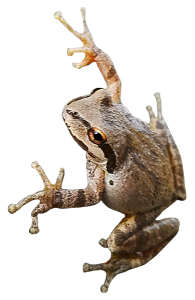 Even though it has ‘tree’ in its name, the Sierran Tree Frog is mostly found near the ground.

Tree frogs live in bushes and grass. Their preference is for damp, moist areas. 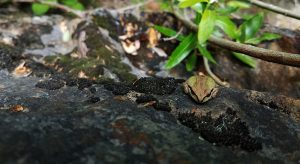 Large toe pads that allow it to walk on vertical surfaces. The toe pads are also useful for clinging to sticks and twigs.

To avoid being eaten, the Sierran Tree Frog is fast! It can jump long distances and swim quickly to hide.  It also remains perfectly still and changes color to stay camouflaged. Sierran Tree Frogs can change from green and gray to brown.

The Sierran Tree Frog is more often heard than it is seen. Males call to advertise availability and attract mates. Breeding and egg-laying occur from November through July. During this time, males establish a territory that they defend with encounter calls, butting, or wrestling with rivals.

Scientists say that we are living in the Anthropocene epoch, a time when human activity is the dominant influence on climate and the environment. Unfortunately, the consequences of this are that many habitats and species will disappear.

Frogs and newts are indicator species because they have thin skin that easily absorbs pollutants. Since they live both in water and on land, they absorb toxins from both environments. Like the miners who used canaries to warn when toxic gas was present, amphibian health determines the quality of the environment.

There are a number of factors that affect amphibian populations. Not unique to Nevada County, these conditions are happening globally.

“We’re running out of places where frogs are healthy,” Amphibian Study Volunteer

“It doesn’t matter how many frogs we save if there is no place to put them back in the wild,” Edgardo Griffith, El Valle Amphibian Conservation Center

California agriculture is the number one consumer of pesticides in the United States.

The state produces half of the US agricultural produce.

“Atrazine (an herbicide) is the most common contaminant in our drinking water. It causes male frogs to turn into females.” – Tyrone Hayes, UC Berkeley Biologist

“Bullfrogs pose several threats to the native amphibians of California, many of which are endangered. When bullfrogs—the largest frogs in North America—escape or are released into the wild, they have a tendency to eat other amphibians and any other wildlife that will fit in their mouths. Their size also allows them to outcompete native species for food. Even worse, a large portion of the bullfrogs imported into this country—62 percent according to one study—are infected with the deadly chytrid fungus (Batrachochytrium dendrobatidis), a lethal skin disease which has already been blamed for extinctions of about 100 amphibian species around the globe.” – Should California Ban American Bullfrogs? Scientific American Blog

Speak up for Nevada County frogs, toads, and salamanders.

If you liked this post, check out Miniscule Mountain Beetle Turning Forests Red 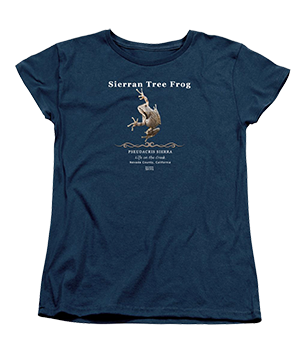 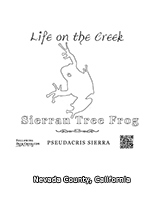 What if there is no happy ending? – Scientific American, 2013