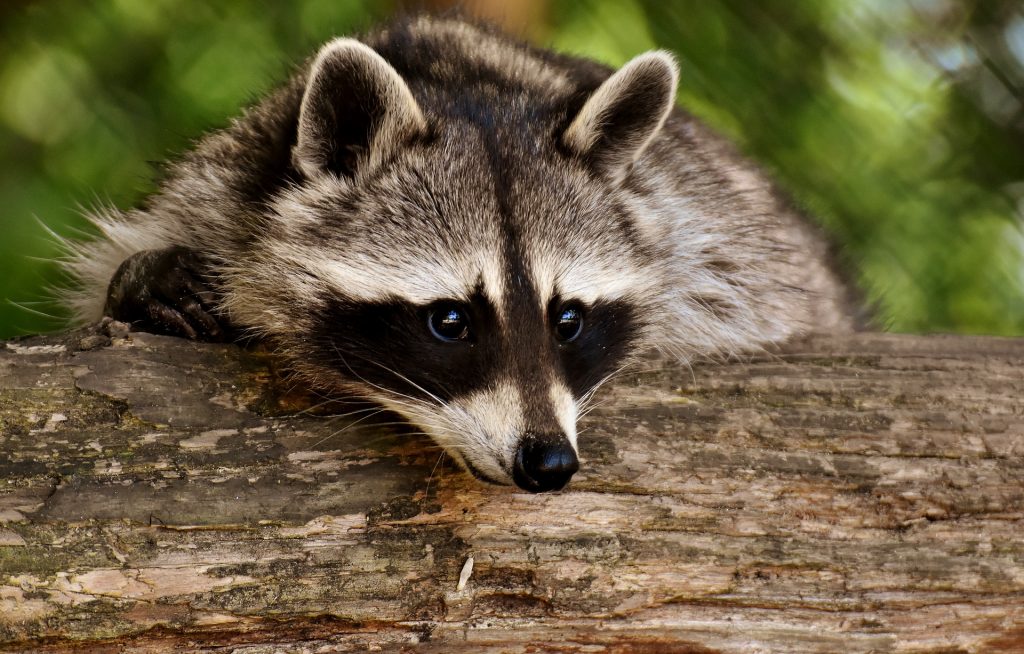 Raccoons explore with touch. It’s long been thought that ‘food washing’ was for cleanliness. Dipping ‘hands’ in water is called dousing; it stimulates nerve endings in the forepaws, giving the animal an improved ability to detect changes in pressure. 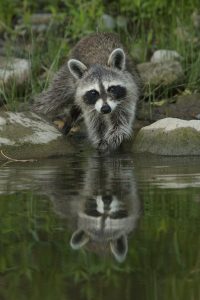 Raccoons don’t have thumbs but use both forepaws to manipulate objects, like hands. Their forepaws have concentrations of mechanoreceptor cells similar to primates and humans.

Since the animal is nocturnal and thought to be colorblind, it makes sense that it interprets the world through touch.

The mask, a stripe of dark fur surrounding the eyes, maximizes night vision by blocking glare.

Raccoons are omnivores; they’ll eat anything. Scientists believe that this characteristic, as with humans, contributes to their extraordinary intelligence.

A raccoon is a relentless problem solver, passing learning along to their young. As people attempt to keep them out, raccoons adapt, becoming smarter in the process.

In 1907, H.B. Davis published a raccoon intelligence study in The American Journal of Psychology. Twelve raccoons were given a series of locks to crack. He presented the test subjects with 13 puzzles to solve. Their success rate was nearly 85%.

“The learning curves for the raccoons and Kinnaman’s monkeys… seem to show a nearly equal facility in learning to undo fasten-ings.”

In urban environments, infection, disease, and cars are the major causes of death

Raccoons in the wild are shy around humans, avoiding them when possible.

Urban raccoons will approach them looking for handouts.

The trapper in the above video is from Florida, but his topics and the other animals he talks about are applicable to Nevada County.

Germany
In 1934 a forester released a pair of raccoons to “enrich the fauna” for hunting. In 1945, twenty-five raccoons escaped from a fur farm after an air strike. Since then, the raccoon population in Germany has grown tremendously. 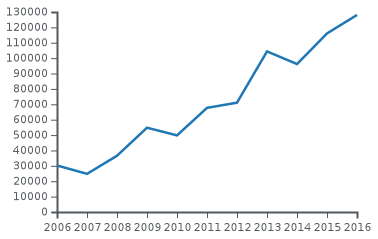 Raccoons are now considered an invasive species.  A zero-tolerance policy is in place. Over 10,000 raccoons are trapped and killed in Germany per year.

Japan
Rascal the Raccoon anime show appeared in the 1970s. As a result, children wanted pet raccoons. At one time, over 1,500 raccoons were imported per month. When keeping them became difficult, many were released in the forest.

Today, raccoons cause hundreds of thousands of dollars of damage to ancient, irreplaceable buildings and temples. Raccoons have spread to most regions in the country. Japan prohibits raccoon imports.

To discourage denning on or near the property;

Wilderness raccoons prefer to poo at the base of trees, on horizontal surfaces, on large rocks or in raised tree forks. Undigested seeds are often visible.

In urban areas, they’ll go on rooftops, decks, woodpiles, and in attics, haylofts, and in garages.

A raccoon latrine is a communal defecation area used by multiple raccoons. 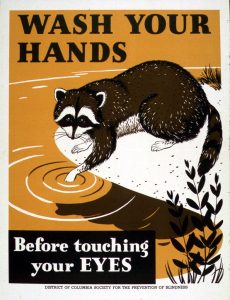 Above is a list of some of the infectious diseases carried by raccoon feces. They can also be spread through contact with urine, saliva, bites and scratches.

Because food sources attract a variety of animals, disease can spread. Infectious raccoons may appear healthy. When a disease moves from a raccoon to a cat, dog, or human, it can be more challenging to combat.

Prepare for cleaning by protecting your airways (mucous membranes) and skin.

• Use a shovel (or inverted bag) to collect feces and contaminated material. Bury or burn. If placing in the trash, double bag and secure to protect landfill workers
• Roundworm eggs are chemical resistant. High heat will kill them. Cover feces with boiling water or blast with a propane torch
• Use boiling water to disinfect shovel blades and deck surfaces
• Burn or boil and disinfect protective gear
• Wash hands thoroughly with hot, soapy water. Launder clothing with hot water and detergent

Apart from post titles, I endeavor to present Deer Creek topics objectively from multiple angles, using reliable sources. While the Center for Disease Control says, “human infections are rare,” I think a cautionary note is valuable.

As more people spread into wild areas, animals with the ability to live in urban areas join us. Our structures, pets, feeding stations and trash fulfill their hierarchy of needs. As a result, species whose paths would rarely cross are ‘meeting at the grocery store,’ creating opportunities for infectious organisms.

There are valid reasons behind the statement, “don’t feed wild animals.”

Below are several worst-case scenarios illustrating those reasons. 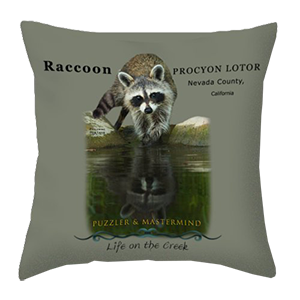 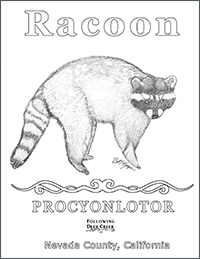 Mental Floss – Rodent, or NOT a Rodent

Northern Woodlands – Raccoons: It’s All In The Hands

Wildlife Animal Control – How to Get Rid of Raccoons in the Attic, House, Yard