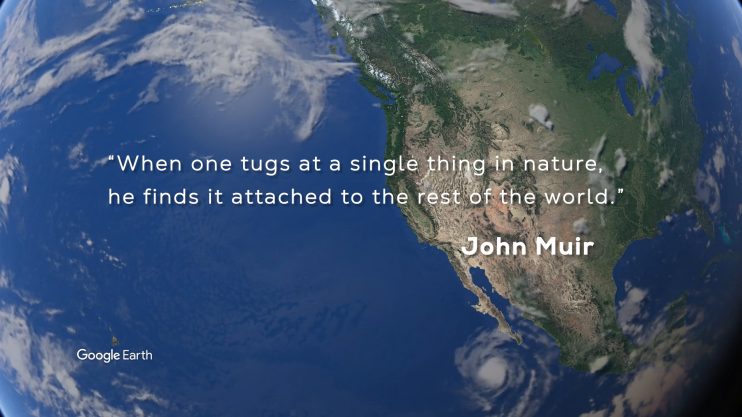 Evolution of the Film 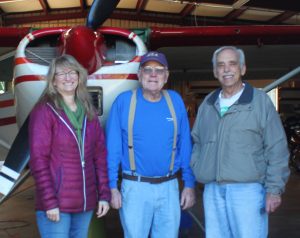 Beginning in 2019, Lisa worked with Roger Harris, Howard Pincus, and Titus Davis to capture seasonal aerial footage of the watershed. The concluding piece of the filming puzzle fell into place when family friend Scott Allen introduced Redfern to a neighbor. The gracious property owner granted access to film Deer Creek Falls in July 2020. 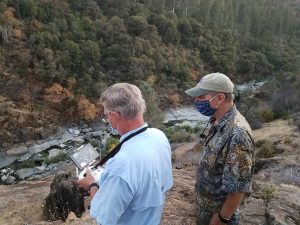 The ‘stars magically aligned’ where everyone was available on the same day during the time when the light was favorable, in the early evening. Eight people participated in the excursion. By this time, COVID had hit Nevada County. Planning a safe gathering with combined households added new challenges. In the end, no one got sick, everyone was especially grateful for the social outing and the drone filming turned out fantastic! 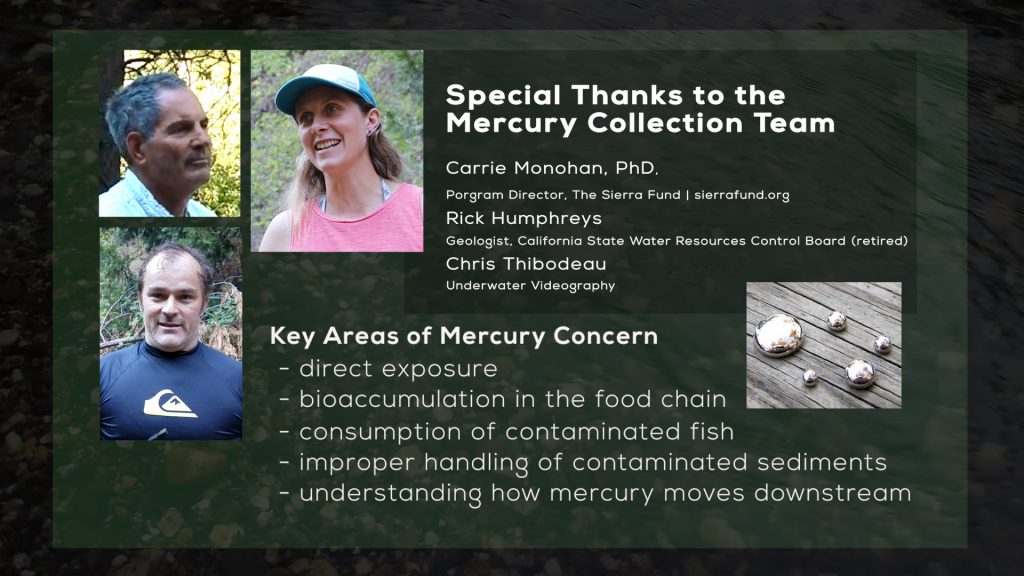 On August 11th, the FDC team, which on that day included SCUBA diver and underwater photographer Chris Thibodeau, met with Carrie Monohan, of The Sierra Fund, and Rick Humphreys, retired Geologist with the California Water Board to find and film mercury collection underwater.

There is only one time of year when this can be done. In fall after winter storm agitation when water levels are at their lowest, mercury (escaped after miners used it to bind with gold), collects at low points in the stream. We unsuccessfully attempted to schedule this event the previous summer and were disappointed when we had to wait. Rick who had been finding mercury over his entire career said, “It’s OK, it’s been there for 150 years, it’ll still be there next year.”

After learning from Rick, Chris continued practicing his new mercury finding skills, as we met for a second time that summer. We didn’t find mercury on this trip but were successful in underwater filming crayfish AND Chris found an even more surprising treasure. A Chinese coin. A direct connection to people mining on the creek that had been claimed by the water until now!

By mid-August, Redfern had a draft version of the film complete. (At this stage, the film was visuals set to music.) When her family was evacuated during the devastating Jones Fire, Redfern’s hard drive with the video project was already packed. With much gratitude, the Redferns accepted the McKeegan and Harris family’s hospitality. While their high school-age sons celebrated togetherness, after spending months apart, they joined forces for a video screening. Bonnie McKeegan’s editorial comment, “Where are the animals?” and Roger Harris’s, “Use your own voice to narrate,” added the missing ingredients needed for completion

In December 2020, as the final FDC blog posts were written and published, David Attenborough’s, Our Planet series was released on Netflix. Of particular note was the ‘how-it-was-filmed’ shorts. They reminded Lisa of her original aspirations of working with a film production crew.

While Redfern’s Following Deer Creek team was not as field-savvy or as elaborately equipped as Attenborough’s, they worked together brilliantly to tell a powerful watershed story that a single person working alone could never have told.

Both the Our Planet and Aerial Views films, as well as the broader FDC blog, share similar themes; human industry has wreaked havoc on the environment and we must protect open spaces, wild animals, and nature’s systems for sustainability and good health. Especially in Nevada County where we may never finish paying for the toxic debt the miners left, we can show many successes of remediation and conservation work.

The Aerial Views and History of the Deer Creek Watershed film was created by Nevada County residents for Nevada County, surrounding communities, and the world as a whole.

How long does it take to fly from Deer Creek’s headwaters to its confluence with the Yuba River?

It only takes about fifteen-minutes.

Will all of the information on the website be included in the documentary?

No, the blog/website is a collection point for research. When it’s time to produce the film, it will be used as a source from which to pick-and-choose.

How close was the final version of the film to its original concept?

“Ha! I aimed to produce an hour-long film that covered a wide range of topics,” says Lisa. “In 2019, when I realized how long it took to produce a 17-minute film, I started having doubts about my original vision. After assembling years of footage, during the Aerial Views editing process, I could see I had a solid 30-minute story. At that point, I knew it would satisfy my cinematic storytelling goal.”

How did the Following Deer Creek (FDC) Project begin?

It began with a storm and a book!

In January 2017, Lisa Redfern was reading The Diary of a 49er.  “It’s been raining all week and the creeks are running bank-full. Over on Deer Creek, it drove all the miners out and filled their claims with rock and gravel,” the entry for January 1851 said.

Energized by the similarities between days, years, and weather conditions, Redfern donned her raincoat, grabbed her camera, and set out to film the creek.

Articles: Miners Provisions & 1850 Food Prices from Diary of a 49er

During that year, Lisa was taking a break from studio work to homeschool her son. The Deer Creek Project took hold as a vehicle to keep her curiosity engaged and her technical skills current.

How has the project changed over time?

Initially, Lisa thought she’d be writing about the little creek running through many Nevada County backyards. How complicated could that be? She quickly discovered that all watersheds are connecting threads in the web of planetary life.

After researching and writing articles for about a year, Lisa felt that she had enough substance on the website to begin approaching interviewees. Historian and Sierra College Professor Gary Noy was the first to graciously share his time and stories.

Native plant specialists,  water managers, and pilots added their skills and talents to the project, growing its personality.

Article: Native Plants for Healing the Land After Fire 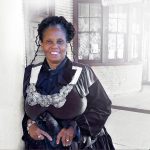 In the summer of 2019, Lisa faced new filming challenges by taking an actress and camera into the field (and water!) to recreate scenes from

Jennie Carter’s book (1860’s). (Jennie Carter was a black journalist who lived in Nevada City and published articles in The Elevator, a San Francisco publication for the black community.)

Do the blog posts have a theme?

Yes! They are connected to Deer Creek.

Do you accept article submissions and guest posts for the FDC blog?

Yes. Please use the contact form to query about your topic before submitting. All articles must have a connection with Deer Creek or the Deer Creek Watershed and will include a list of science-based references. Examples; State Fish and Wildlife Services, United States Department of Food and Agriculture literature, and University publications. (Tip – study the resource lists at the bottom of several blog posts.)

For additional information, visit the About page.