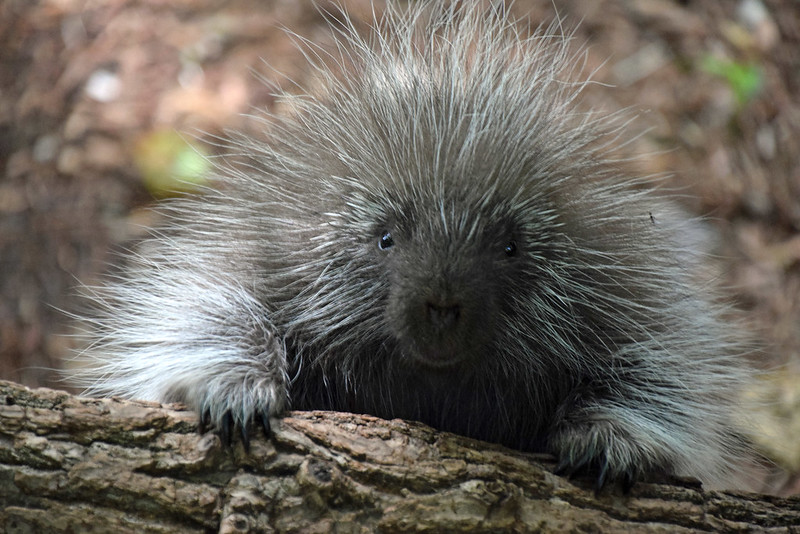 If you’re lucky enough to see one of these shy nocturnal rodents, don’t worry. It won’t charge or shoot sharp darts. If your dog sees it, his/her up-close canine curiosity may result in a painful payback.

According to the Nevada County Resource Conservation District and Wikipedia’s List of Mammals of California porcupines should live in the Deer Creek watershed. However, recent  iNaturalist observations (2019-2020) only show sightings in the Sutter Buttes and around Truckee. The California Department of Fish and Wildlife is asking the public to log sightings. (See last paragraph below.)

These animals are north American’s second-largest rodent after the beaver. 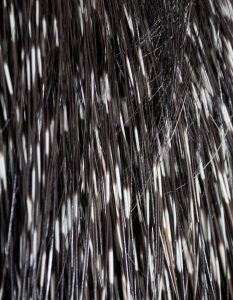 Most of the animal is covered guard hair that looks like quills. Quills are located in a structure, called the rosette, on the animal’s back-side. It flares out – like a dog

raising hackles – when the rodent feels threatened. In order to become stuck by the quills, the threatening animal must press against the rosette which triggers quill release. Porcupines will also do tail slaps, similar to beavers, as a warning or with direct contact. Smartly, they aim for the face!

Quills are lightweight and hollow. In addition to defense, they also help the porcupine stay warm in cold weather.

Within the rosette is skin that produces a noxious odor – R-Delta-Decalactone- a waxy grease that spreads to nearby quills and hair. It emits a stink cloud announcing the animals’ presence, especially at night.  Folks familiar with the smell say it’s similar to strong body odor or soft cheese. 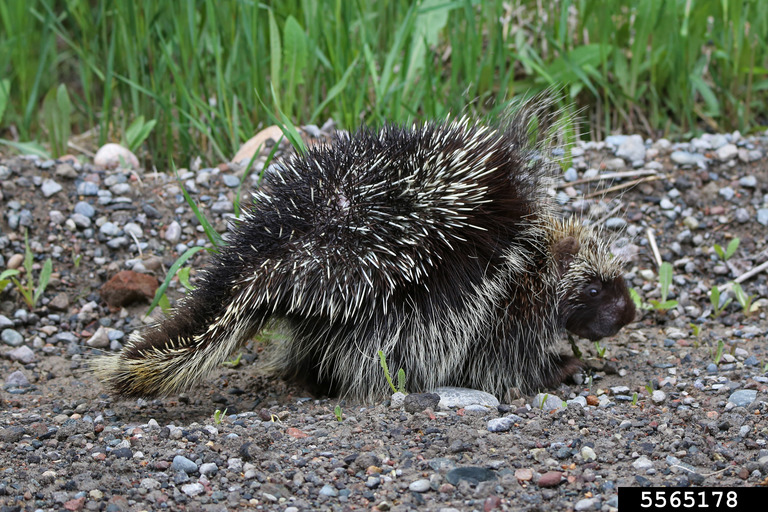 Medical researchers are studying quill barb designs for an alternative to surgical staples (see articles in Resources below).

According to Dr. Uldis Roze, who was punctured by a quill that traveled up his arm, porcupines produce antibiotic chemicals that coat their quills. It’s a defense against self-injury., a common occurrence when porcupines fall from trees.

In addition to quills and a stink that grows stronger with fear, it’s black and white coloring and teeth clacking are also defense mechanisms. 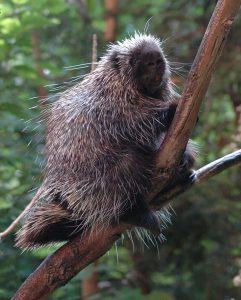 North American Porcupines are nearsighted, slow-moving, and solitary. During the day they spend most of their time in trees. In winter, they’ll hang out near their den.

The North American Porcupine is an herbivore. Below is a list of food sources. 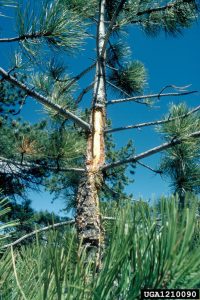 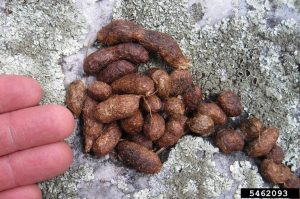 Mating begins in the fall high up in tree branches. To signal receptivity, the female excretes a strong odor – a mixture of urine and mucus. Males arrive and wait. If multiple show up, they fight for dominance.

When the winner approaches the female in the tree, he spritzes her with urine which begins a chemical reaction sending her into full estrus. To complete the process, they move to the ground where female holds her quills flat against her body and lifts her tail so as not to injure the male.

Porcupine Mating in a Zoo

Compared to other rodents, North American Porcupine mothers are pregnant for 202 days.  (A female beaver carries for 128 days.) 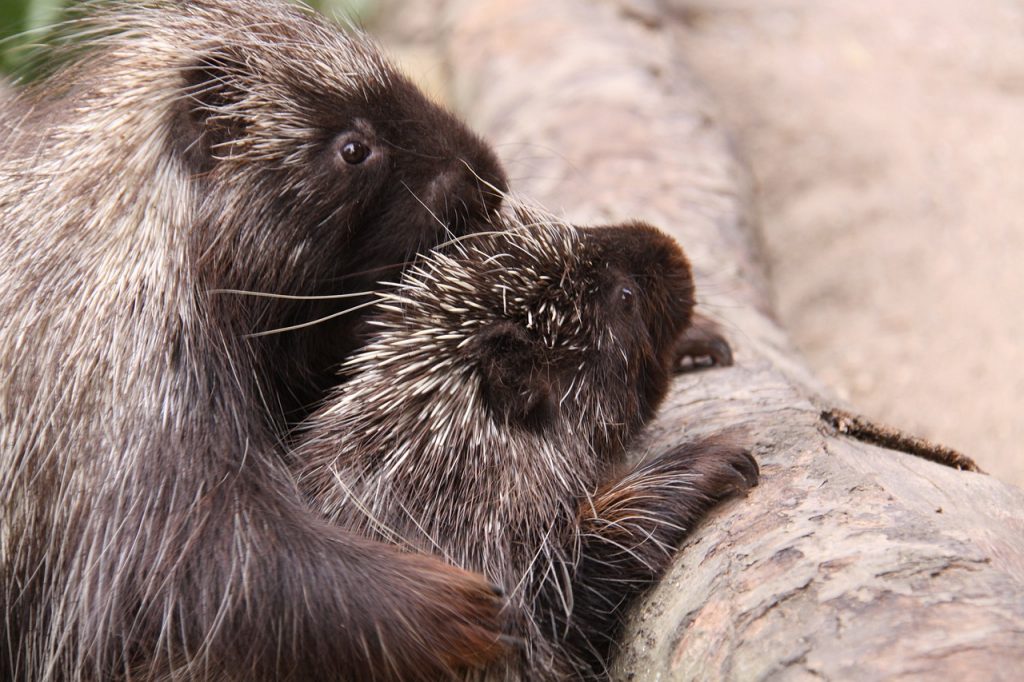 They give birth to one soft-quilled procupette at a time. Quills harden after birth. A porcupine mother will nurse her young for up to four months.

Young are full-grown in two years.

Mothers care for youngsters but do not defend them from predation.

If they are not hunted by humans, poisoned, killed by cars or die of starvation, a healthy North American Porcupine can live up to 30 years. 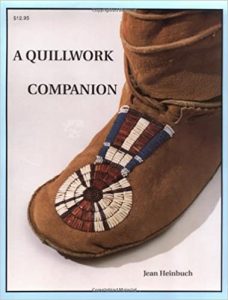 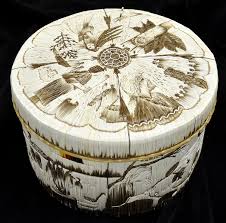 Hunters eat them and farmers have exterminated them as pests.

California Department of Fish and Wildlife (and iNaturalist)

“Observations of porcupines in recent years have become relatively uncommon and DFW is soliciting sightings from the public. In California, porcupines are most common in montane conifer and wet meadow habitats, and can be found in the Coast Ranges, Klamath Mountains, southern Cascades, Modoc Plateau, Sierra Nevada, and Transverse Ranges.” – CDFW 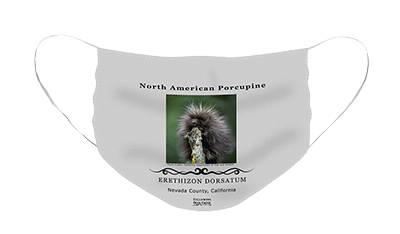 Click image to view more Life on the Creek art

If you enjoyed this post, you may also like North American Beaver- Water Banker or ‘Oh’ possum, a Tick Eating, Fear Fainting Marsupial

Bay Nature – Do Porcupines Life in the Bay Area? 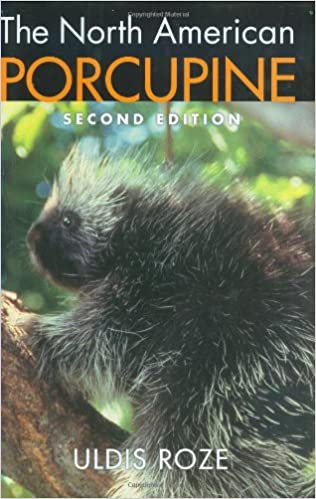 Removing Porcupine Quills – Quills Can Travel Through the Body