The shrimp sized roly-poly kids love to play with has a night job making soil a nicer place to live…if you’re a plant or microorganism.

Conglobation is the act of rolling into a ball. Entomologists say this behavior also preserves water when the surroundings become too dry.

Pill bugs are isopods (without a backbone); not bugs at all, they are crustaceans most closely related to shrimp and lobster. 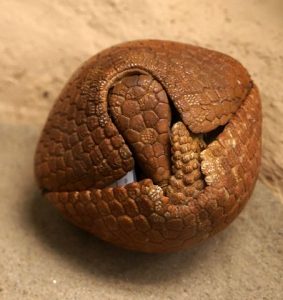 The scientific name, Armadillidium vulgare, was given for its likeness to the armadillo conglobation behavior.

Out of the Water but Retaining Moisture

Millions of years ago, these crustaceans moved from the ocean and adapted to life on land.  Gills formed pleopods that act like lungs. These must be kept moist to function.

A fascinating behavior is a 911 pheromone call. Responding to the chemical communication, a large number (70+) of like-species aggregate. Animals arrive to cover an individual with their bodies to assist with water retention.

Typical habitat is under rocks, leaves, or fallen logs and in compost piles. Generally, millipedes, earthworms, and sow bugs are found in the same places. Pill bugs need moisture, but they don’t like saturation.

Studies measuring the biomass (total number) of animals in different locations on farms found that pill bug populations are stronger in untilled soil and in environments where pesticides have not been used.

Because pill bugs need calcium to maintain their exoskeleton; they prefer soil with a neutral pH.

Although Armadillidium vulgare can be found during the day, most of their activity occurs at night.

Fortunately, pill bug dietary requirements align with the need for moisture. They feed on decaying wood, plant matter, and fungus. Occasionally they will also graze on algae and lichens.

Their excrement further breaks down nutrients making them available for microorganisms and tree roots.

Pill bugs consume copper, zinc, lead, and cadmium. Rather than absorbing and eliminating the metals, they accumulate and store them in digestive glands. Because of this, pill bugs are useful bioindicators of heavy metal pollution.

Females produce one to two broods per year consisting of 100 to 200 eggs. She carries them in a marsupium-like pouch on her underside for nearly a month. After hatching, the young remain in the pouch for several weeks, feeding off marsupial fluid.

Once leaving the mother, babies molt every two weeks for the next four-and-a-half months gaining body segments and additional legs.

Adults can live for two to five years.

Next time you spot a roly-poly, you’ll appriciate that its much more
than a ‘bug’ that rolls into a ball. 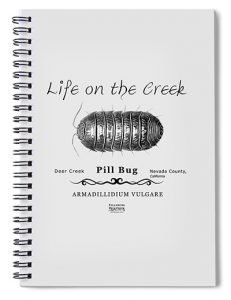