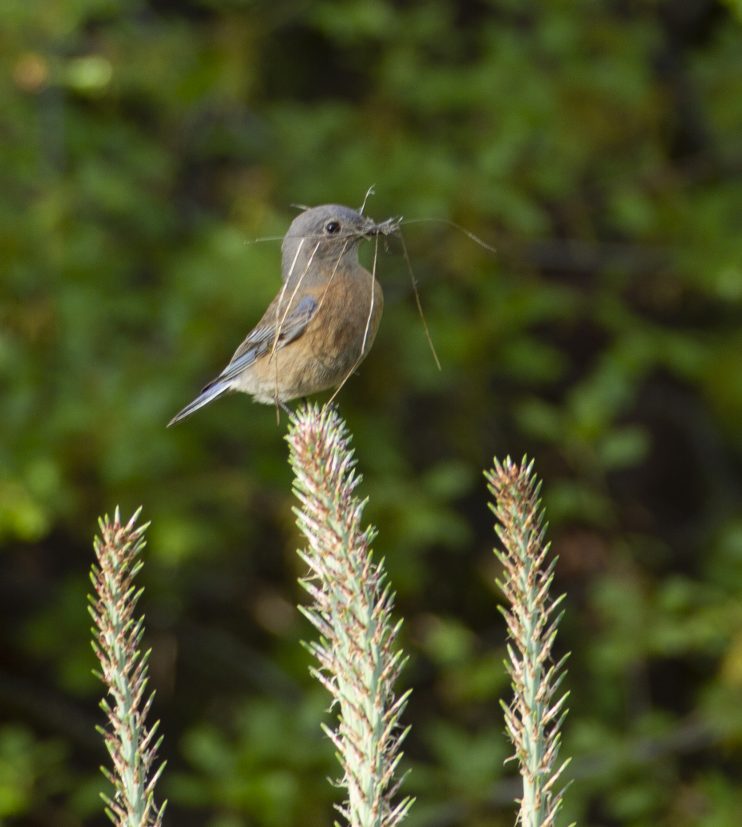 Bird of Good Cheer and a Hopeful Spring

Throughout history, and within many cultures, bluebirds symbolize happiness, protection, and hope. People may have first taken notice of the birds because of their unusual coloring, or for their behavior; swooping through meadows and open spaces, cheerful song, or large family units raising young each spring.

When the bluebirds start building nests this spring (2021), it will signal a time when COVID quarantines and isolation may begin lifting. For those with creative inclinations, this cheer inspiring avian may, once again, be used to celebrate hope and authentic community freedom in song, writing, painting, filling in blocks of color on a coloring sheet, or building and distributing nest boxes.

Bluebirds lack beak and skull adaptations to bore their own nesting cavities; therefore, they rely on second-hand holes of a certain circumference.

“Bluebird conservation is a shining example of a totally grassroots effort that has been tremendously successful. It illustrates the power of individuals and groups to make a difference.” – Elizabeth Zimmerman Smith 2020, Woodstock, CT at Sialas.org

During spring and summer, bluebirds mostly feed on insects. Their hunting grounds are open grasslands where they perch on branches or fence posts to watch for bugs. When they spot prey, they’ll swoop in for the catch. In addition to insect hunting spaces, bluebirds also need reliable sources of fresh water.

In the winter, they feed on berries.

Spring begins with nest building. Bluebirds choose existing cavities in which to nest.

Females lay one egg a day for a clutch between 4 – 6 days.

After a fourteen-day incubation, with the male bringing her food and standing guard, all eggs hatch on the same day.

After hatching, both parents feed chicks for approximately two weeks.

Once the young have fledged and begin traveling from the nest box to hearby branches, the female leaves to begin building a second nest while the male finishes caring for the first brood.

House Sparrows and Starlings are aggressive cavity-nesting competitors that were imported into New York between 1853 and 1890. The first to deal with inchworms and the second to introduce Shakespeare’s play birds into Central Park.

Other Birds that Compete for Cavity Nest Sites

From Red Dead Redemption 2 to the Wizard of Oz, Sesame Street’s Big Bird, Niel Young, and Native American folklore the bluebird makes consistent appearances in American popular culture. It has also shown up in  as well as in ancient Chinese, Japanese, Native American and European folklore, the bluebird has symbolized hope, happiness, protection and change.
The symbol of a bluebird as the harbinger of happiness is found in many cultures and may date back thousands of years.