The Ariolimax genus for the Pacific Banana Slug means “air slug.” It is a shell-less terrestrial gastropod mollusk and is the world’s second largest slug species.  Its lifespan is between one to seven years. 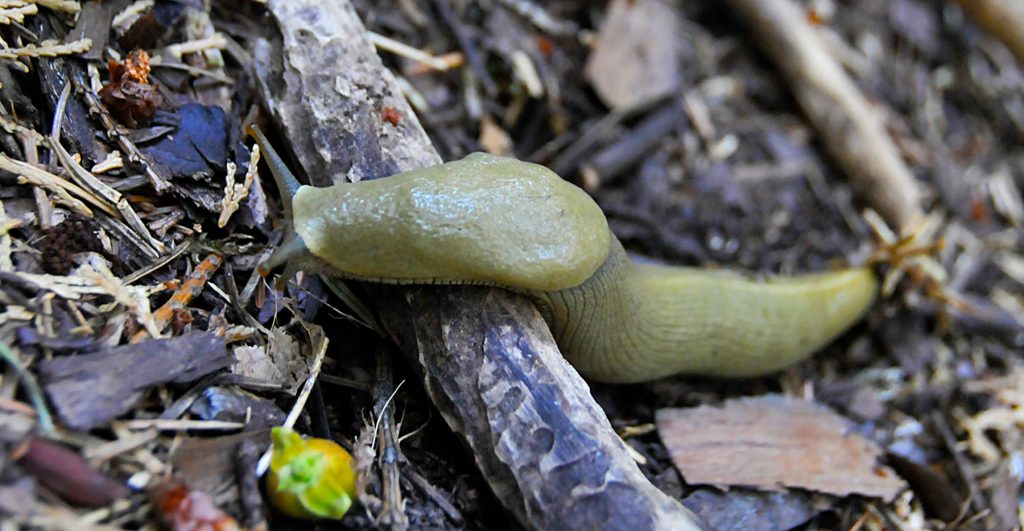 Like the Pill Bug, much of a slug’s activities focus on water retention. Banana slugs keep to damp places under logs, inside tree bark, around rocks or planters. They are active at night and after rain when slime most effectively soaks-up surrounding water.

Color changes with age, health, exposure to light, diet, genetics, and the amount of moisture in the surroundings. While some Banana Slugs have black spots, this is not a way to distinguish between the Ariolimax subclasses; Columbianus and Californicus, both varieties found in California. (To make the distinction, see ‘Subclass Penis Particulars’ below.)

A slug’s mantle, the thick part behind its head, is the location of the slug’s single lung and reproductive organs. (It’s also where a shell would go, if it had one.) A large hole on the right side opens and closes according to oxygen needs. In dry weather or heavy rain, the slug completely closes its pneumostome. When it wants lots of air, it keeps it open wide.

With the ability to move eyestalks independently, the slug survey’s the environment. The top eye tentacles sense light changes and scans for threats. The bottom set feels and smells.

Slugs, like other forest floor dwellers, break down particles and nutrients that contribute to healthy plants. They are non-picky herbivores. They’ll eat; dead plants, fungi, animal droppings, and leaves. 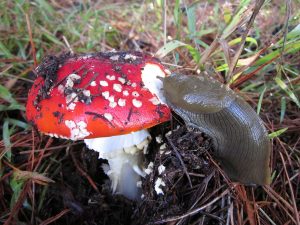 Mushrooms are a favorite food. 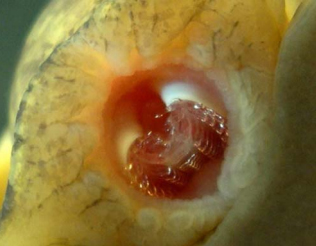 To eat, slugs have sharp-toothed tongues, radula, that grind particles to a pulp.

Slime is the Banana Slug’s superpower. It’s used to travel, rappel, communicate, mate, for personal hygiene and for self-defense.

Slime contains mucins that inflate to one-hundred times their size when exposed to moisture.

When a slug wants to move, it glides where it wants to go, utilizing external moisture to plump-up slime roads.

Slime trails, sensed by the lower tentacles, tell an encountering slug the direction the other slug is moving. It also contains pheromones that trigger mating behavior.

Anesthetic compounds in slime cause numb feelings humans experience when licking slugs (why?!) and are part of the animal’s self-defense mechanism.

Finally, a slug’s got to look good. Mucus produced near the head, washes stuck-on body debris to the tail where the slug can eat it.

Although slugs have both male and female genitalia (hermaphrodite), they prefer to mate with a partner. Forming a circle, Banana Slugs swap sperm. A few days later, eggs are laid in moist secluded places such as in a log or a hole in the ground. Banana Slugs mate and reproduce year-round. 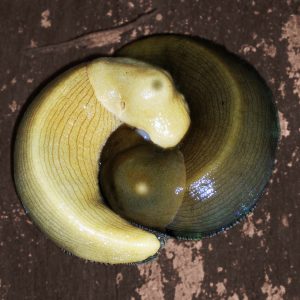 It takes a month or two for eggs to hatch. When young are small and haven’t fully developed slime abilities, they are most vulnerable to predation. 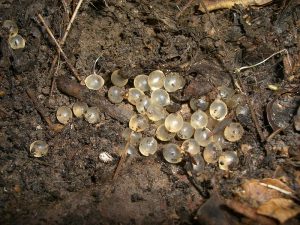 Apophallation may be as interesting as slime. It’s when slugs become stuck in the mating position.

One or both animals chew off their penises.

Not to worry! Next time a penis-missing slug meets another, she’ll use her female reproductive parts.

Ariolimax Columbianus has a penis that sticks out / protrudes, top (apex) is rounded and blunt
Ariolimax Californicus has a penis can turn inside-out (like a vagina), top portion (apex) is equal to and can be greater in length to the basal portion. The muscle that pulls it back is shaped like a fan and is located at the penis tip.

Reptiles, birds, amphibians, fish and other mammals will prey on Banana Slugs. 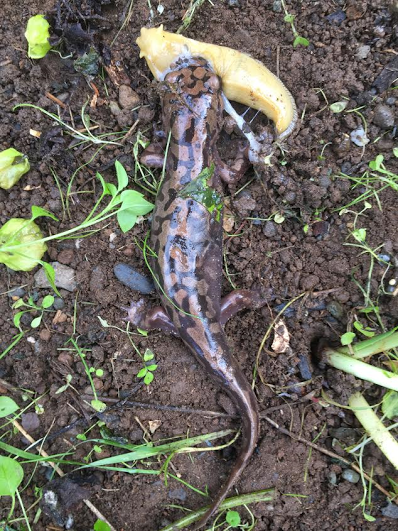 When under siege, a Banana Slug contracts its muscles, making it more compact. It produces a sticky, foul-tasting. mouth numbing mucus making it a less appealing meal. 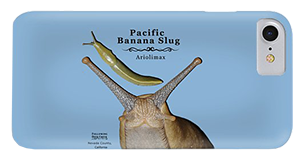 Note: The spelling of Mollusc and Mollusk are both correct. The version with a ‘k’ is oldest. Unless a reference source used ‘c’, the ‘k’ version is used.