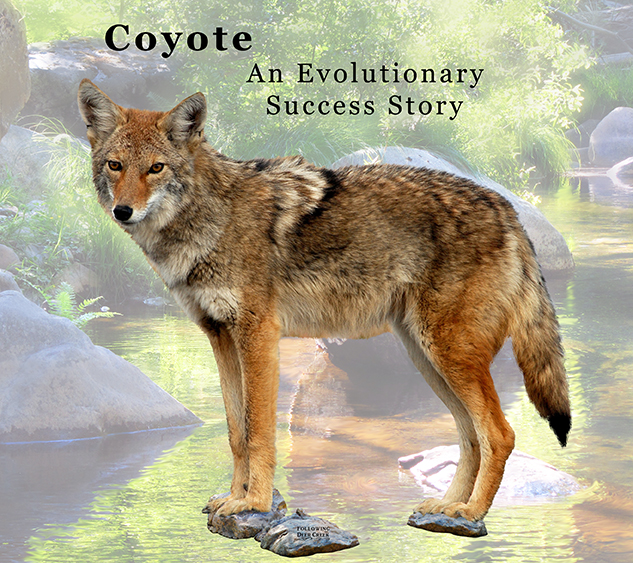 Coyote is the Most Vocal North American Land Mammal

Between 11-13 vocalization have been identified. Wildlife biologists have categorized several sound types;

The lone howl, the most recognized coyote vocalization, is thought to be a proclamation by an individual coyote separated from its pack.

Contact & Greeting – ‘Wow-oo-wow’ appears to be a “greeting song” when two or more pack members reunite. Group yips are thought to be a response to the lone howl.

Originating near Yellowstone three million years ago, this medium-sized canine is extremely adaptable and intelligent. They’ve settled into every wild, rural and urban corner of the North American continent.

Unlike other species that were extinguished by eradication efforts, Coyotes create replacement populations when their numbers are reduced.

Breeding season is February through March. Coyotes are monogamous and mate for life.

In spring, newly mated couples claim territories and set-up dens. Den establishment may be cleaning out a previously used space or taking over an abandoned skunk, badger, or marmot holes. 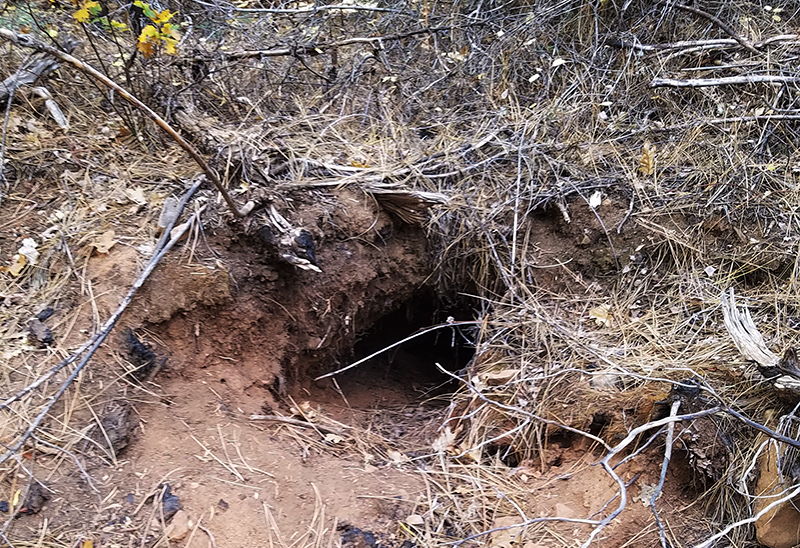 A pregnancy lasts about two months. Litters range be between 3 – 12 pups. Litter size is determined by the number of other coyotes in the territory and the availability of food.

Once the cubs are born, the male and other pack members help feed, raise and protect them. Pups remain with the parents somewhere between six months to one year.

Hunting coyotes can be singular or work in groups. At times pairs and small packs will form to take large prey such as deer, cow, sheep, or large domestic dog. (The ever-unpredictable coyote may also initiate play behavior with large pet dogs.)

Occasionally, coyotes will form interspecies relationships. Coyotes have been observed working in tandem with American badgers while rodent hunting. A badger has been seen allowing head snuggles and face licking from a coyote.

While not common, coyotes have been known to breed with dogs when there is no other alternative. 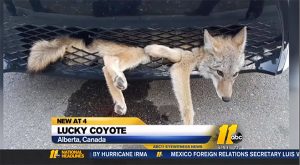 90% of a coyote’s diet consists of meat, but a coyote will eat almost anything, often experimenting with previously unknown items.

In wild areas, coyotes may compete with bobcats and mountain lions for mule deer.

If fresh meat is not available, coyotes will scavenge for;

In winter they will also eat;

In urban areas, a coyote diet can consist of;

Coyotes in cities should be wary of humans.

It’s up to people to reinforce the coyote’s fear

Hazing will help maintain healthy boundaries for all. 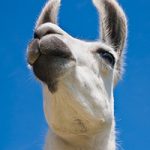 In areas where livestock is at risk, some ranchers and farmers have found that llamas, donkeys, and dogs bred for guarding aid as coyote deterrents. (See University of California – How to Manage Pests link below for details.)

When a Coyote Becomes a Safety Hazard

A coyote becomes a public safety hazard when it no longer fears humans and behaves with aggression.

Coyotes that bite humans have usually been fed by humans

In 2017, the USDA Animal and Plant Inspection Service killed 3,199 coyotes in California.

If a coyote has developed bad behavior, a predator removal professional must be called (it is illegal to shoot firearms in populated areas). Coyote relocation is not an option, the animal is killed. Nevada County’s Federal Trapper can be reached at 530-470-2690 during office hours.

With their ability to predict outcomes, make changes, communicate, quickly identify new food sources and understand human behavior, it’s easy to see why the coyote is an evolutionary success story.

In Nevada County, and along Deer Creek, it’s important to realize that coyotes are always watching. Just like discouraging bad bear behavior, residents must be vigilant about keeping food and water sources at a minimum. It’s also wise to mindful about creating situations where small pets and farm animals may become prey.

If humans do their part by keeping coyotes wary, the two species can coexist peacefully. Haunting coyote song will serenade us at night and they’ll keep our rodents, insects and rattlesnakes in check. 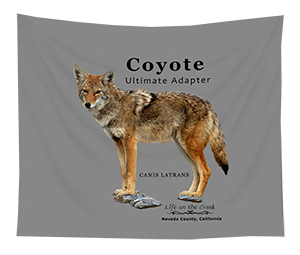 If you liked this post, you may also enjoy Bobcat – Susceptible to Rat Poison or Turkey Vulture – Carion Cleaner.

University of California Agriculture & Natural Resources – How to Manage Pests of Homes, Structures, and Pets – Coyote